Say No to Green Climate Fund money for REDD in Nicaragua/

OPEN Letter to Board Members of the Green Climate Fund

We call on the Board of the Green Climate Fund to reject the “Bio-CLIMA Project“ Integrated climate action to reduce deforestation and strengthen resilience in BOSAWÁS and Rio San Juan Biospheres”(*) funding application (FP146), submitted by the Central American Bank for Economic Integration (CABEI) on behalf of the government of Nicaragua. This funding application underscores why the Green Climate Fund must urgently stop providing funds for REDD: The biased and incomplete description of drivers of deforestation and the worrying activities that result from this inadequate analysis presented in FP146 expose REDD once more as a concept that has failed to contribute to addressing the drivers of deforestation. Worse, its implementation puts people’s livelihoods and even lives at risk and exacerbates conflict, both between state agencies and REDD project proponents and communities exercising their customary rights to land as well as between and within communities.

The REDD funding application submitted by CABEI on behalf of the government of Nicaragua poses an extraordinarily high and predictable risk to inflame tensions over land use in an area where historical (in)action by successive governments has resulted in escalating illegal settlement and corporate extractivism inside the territories of indigenous peoples and afro/descendant communities in both areas that the funding application is focused on. Massive deforestation has been the result, with 150,000 hectares of forest destroyed annually in Nicaragua between 2005 and 2015, much of this in the Bosawás and Indio Maíz / Rio San Juan protected areas.

Implementation of this funding proposal is bound to violate indigenous peoples’ rights. The activities described in the funding application are also bound to fail in reducing deforestation in these large intact forest areas on the Caribbean Coast of Nicaragua because the project ignores key drivers of deforestation such as the issuance of logging and mining licenses to foreign corporations without consent from the competent authorities in the indigenous peoples’ territories. For example, within a month of a new law that created the Nicaraguan Mining Company in 2017 and facilitates access to mining concessions for foreign mining companies, the total land under mining concessions more than doubled, from about 1,2 million to 2,6 million hectares. This is over 20 percent of the country. About 853,800 hectares of those concessions are in the buffer zone of the Bosawás protected area.1

A recent report also exposes the link between mining concessions, deforestation and violence in the areas targeted by FP146. The report shows that the directors of three mining companies are behind one of the logging companies, MLR Florestal, responsible for forest destruction and violence in the areas.2 Many of the industrial concessions within these areas have been handed out without the legally required consent from the indigenous peoples whose territories are being destroyed by these logging and mining activities.

While the funding application mentions cattle ranching as a cause of deforestation, it fails to present a thorough analysis of the underlying drivers such as an export-oriented meat sector, with links between the industrial export industry and the cattle often raised in illegal settlements inside the indigenous peoples’ territories. As a result, the proposed activities to tackle illegal settlements and cattle ranching will both fail to reduce deforestation and cause more violence and despair.

Another driver of deforestation that is absent from the funding application is government inaction over years in completing the final step of legal recognition of the territories of indigenous peoples and afro-descendant communities in the two Caribbean Coastal Autonomous Regions. These rights are protected by the Nicaraguan Constitution, and the Constitutional Law 28 requires, among others, this final step called Saneamiento, or healing of the land. It requires the state to remove all settlers and companies operating inside the territories of indigenous peoples who do not hold legal titles or lease agreements with the appropriate community authorities.

Indigenous peoples such as the Nicaraguan Alliance of Indigenous and Afro-descendant Peoples (APIAN) have warned that “all indigenous and afro-descendant territories of Nicaragua are being colonized. At the Indio-Maíz Biological Reserve gold miners are being established and armed groups have on many occasions threatened families from the Indigenous Rama and Afrodescendant Kriol peoples. Meanwhile, in the Bosawás Biosphere Reserve, groups of men armed with weapons of war have caused the forced displacement of entire communities of the Miskitu and Mayangna Indigenous peoples, and the State has failed to protect these peoples despite multiple requests.”3 Despite repeated calls from indigenous peoples associations for the government of Nicaragua to fully implement a decision by the Interamerican Court of Human Rights confirming this legal obligation on the state, the government has not taken concrete steps towards removing illegal settlements or corporations operating without the consent of the indigenous communities.4

In short, the REDD funding application presented by CABEI completely fails to mention mining and industrial logging and government inaction in carrying out the Saneamiento within recognized indigenous territories in the Bosawás and Indio Maíz / Rio San Juan protected areas. Instead, the funding application is one more in the long list of REDD proposals which perpetuates the one-sided narrative of blaming deforestation on peasant farming. While illegal settlements undoubtedly are a driver of deforestation in these two protected areas and the indigenous territories, the funding proposal fails to provide the contextualisation and analysis of this phenomenon that would be crucial to derive adequate responses to this devastation.

Government fulfilment of this legal obligation would undoubtedly be a significant contribution to ending deforestation in these indigenous territories. It would be particularly important in light of the escalation of illegal settlements since the outbreak of the COVID-19 pandemic. These settlements would not be possible without the complicity of state authorities and the participation of the private sector of both national and foreign capital. The same context enables the construction of new churches in and around illegal settlements. A July 2020 briefing identifies the location of a total of 23 churches that have been built illegally inside the Indio Maíz / Rio San Juan protected area.5 The briefing notes the explicit support for illegal construction by government authorities, citing as one example the office of the mayor of one town in the region providing materials for construction.

The escalation of illegal settlements since the outbreak of the COVID-19 pandemic has also led to an alarming increase in people being killed. The number of indigenous persons who have been killed in conflicts with invaders has nearly doubled, compared to recent years.6 Since January 2020, ten people from the Mayangna and Miskitu communities in the North Caribbean Coast Autonomous Region alone have been killed, bringing the total number of killings since 2015 to 46.

In February 2020, the Office of the UN High Commissioner for Human Rights (OHCHR) stressed the lack of protection of indigenous peoples’ rights and the impunity for crimes committed against indigenous peoples in the regions where the BIO-CLIMA Project would be implemented. The OHCHR urged the Nicaraguan Government to take the necessary steps to prevent further violence and protect the land, territories and resources of indigenous communities.7 If anything, the situation has taken a turn for the worse since then.

None of this is reflected in the funding application that CABEI has submitted on behalf of the government of Nicaragua. Instead, the funding application includes activities that in essence will provide impunity to illegal settlements. Even the Green Climate Fund environmental and social risk screening itself has called the “risks of the project intervention aggravating the conflicts between campesinos-colonos and [indigenous peoples] communities” as “significant”.

In other words, this REDD funding application is likely to not address the real drivers of deforestation in the Bosawás and Indio Maíz forests and the 42 proposed actions include several that are very likely to inflame existing conflicts that go back to government policies that push peasant farmers into indigenous peoples’ territories.

Furthermore, the CABEI REDD funding application proposes a ‘free prior and informed consent’ procedure that undermines the legal protection granted to indigenous territories in the Caribbean Coast Autonomous Regions, where most activities contained in the funding application FP146 will be implemented.

Law 28 of the Nicaraguan Constitution guarantees the inalienability of Indigenous and Afro-descendant land rights and recognizes these communities’ right to exercise full control over their lands. Decisions about the use of the land thus rests with the community.

Over 80% of the funding proposal’s budget is to be spent in two protected areas that include large parts of indigenous peoples’ and afro-descendant communities’ territories where communities are granted these legal rights to determining the use of that land. The CABEI funding application makes no secret of the fact that the proposal has not been discussed yet with communities in these territories.

How, then, does CABEI claim to comply with the Green Climate Fund requirement for funding applications that affect indigenous peoples’ territories to demonstrate ‘free prior and informed consent’? CABEI simply proposes to exclude communities that do not provide consent to the proposed activities. This is a very disingenuous interpretation of the principle of free prior and informed consent (FPIC), to say the least. In fact, given the ongoing state intimidation and massive repression of critical voices in Nicaragua that has elicited the concerned note of the UN High Commissioner on Human Rights, among many others, greenlighting by the Green Climate Fund Secretariat of a proposal with such a flawed FPIC procedure is very likely to put community members in these indigenous and afro-descendant territories at risk. Is this what the Green Climate Fund’s FPIC policy amounts to in practise? A report released just weeks ago identifies numerous instances where state-sponsored parallel governments have appropriated Indigenous land rights in order to control the issuance of land titles and concessions. 8

How can a funding proposal with such an inadequate FPIC approach pass the Green Climate Fund’s assessment process when it is well documented that the Constitutional right of indigenous peoples and afro-descendant communities in the territories targeted by the CABEI funding application have been and continue to be under threat?

This funding proposal submitted by CABEI, on behalf of the government of Nicaragua, demonstrates why it is imperative that the Green Climate Fund immediately stop funding for REDD. That a project proposal like FP 146 which is based on such a dangerously inadequate assessment of the drivers and context of deforestation could pass the Green Climate Fund screening process, is very worrying. In fact, the failure to adequately assess the risks contained in this REDD funding request and advancing such a REDD proposal to the stage of Board approval risks putting people’s lives at risk in a context of violent state repression of critical voices in Nicaragua. Let us remind you that for civil society organisations to even publish a letter critical of the funding request presented to the Green Climate Fund Board is likely to expose any organisation to a real risk of repression and criminalization.

Approval of FP146 would undoubtedly expose the Green Climate Fund to serious reputational risk: Conflict, criminalization and repression of critical voices are a foreseeable reality if this funding request is approved by the Green Climate Fund Board. For all these reasons, we urge the Board to reject the CABEI funding request FP146 for the “Bio-CLIMA Project“ Integrated climate action to reduce deforestation and strengthen resilience in BOSAWÁS and Rio San Juan Biospheres and to stop approving further REDD+ funding requests.

1 Oakland Institute (2020): Is Nicaragua For Sale? Foreign Mining Companies Are Eager to Buy.

8 Oakland Institute (2020): Is Nicaragua For Sale? Foreign Mining Companies Are Eager to Buy. 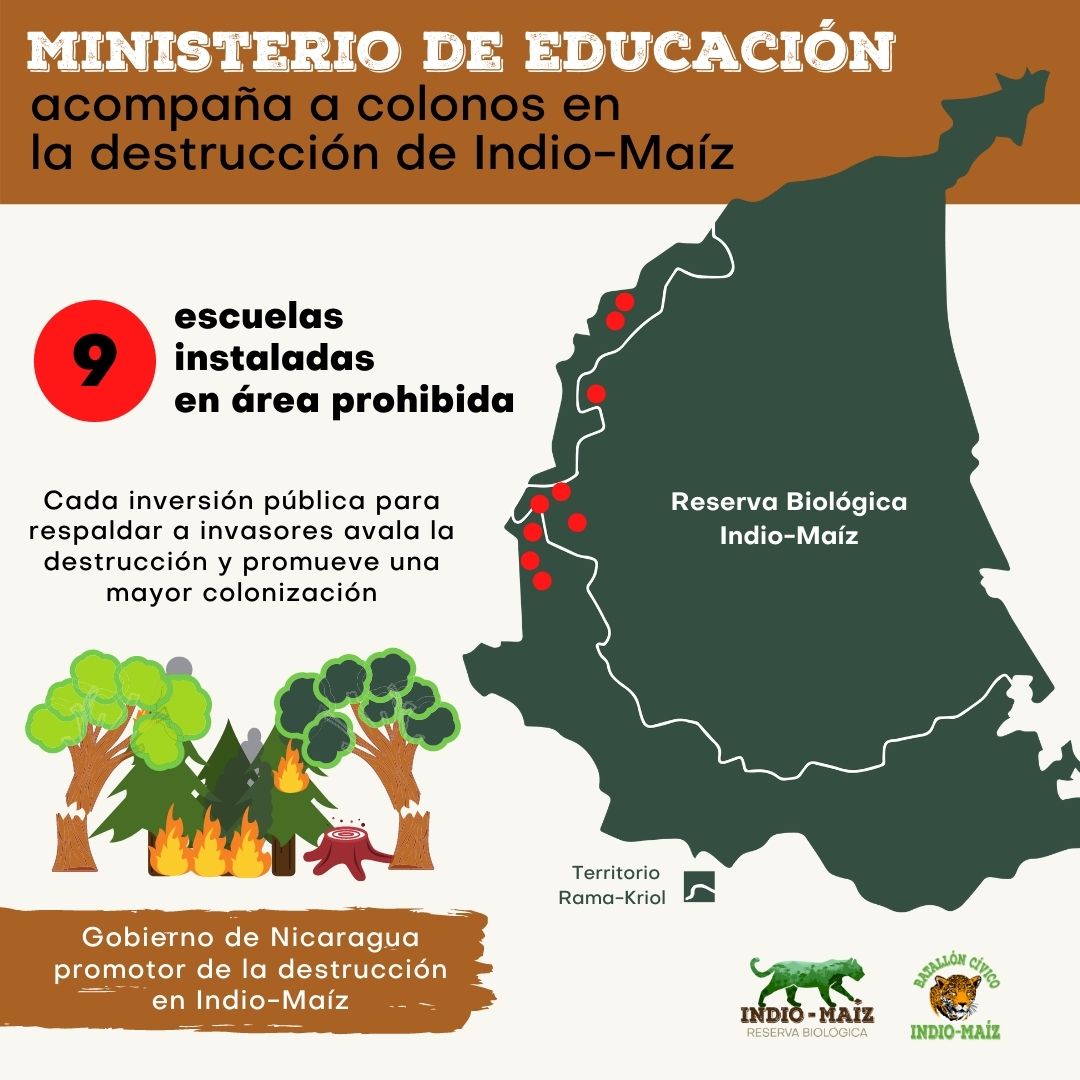